Women in STEM: Perspectives in the Changing Field of Biological Sciences

By: New U Photo

In today’s increasingly diverse STEM population, 46% of all biological scientists in the U.S. identify as female. Compared to years before, the field of biological sciences is progressing into a more equitable and inclusive field for women. Spotlighting their lives studying and working in the biological sciences at UC Irvine in differing levels of education, three women share their experiences in this field as it grows.

Joanne Chin is a third year biological sciences undergraduate student at UC Irvine. Her biggest accomplishment in STEM is being a researcher in the William Tang lab, where she researches optogenetics and neuronal activity stimulated by light.

According to the UCI BioSci 2018-2019 Student Profile, 65% of all undergraduate students at the School of Biological Sciences identified as female. Chin describes her classroom experience to be reflective of this as she has studied alongside many other female students in her biology courses at UCI.

Chin’s future plans include attending physician associate/assistant (PA) school with a specialization in neurobiology. She is grateful for the clinical opportunities she has received so far, including the ability to work alongside female medical assistants and serve female patients.

Dr. Rachael Barry is the Assistant Professor of Teaching and Co-Director of the Microbiology and Immunology major at the UC Irvine School of Biological Sciences. Her research involves examining the best practices for scientific teaching, and she teaches senior undergraduate courses on microbiology and biochemistry.

Being able to interact with both faculty and students, Barry observes that the trend in gender representation is moving in the right direction for the School of Biological Sciences. Although the population of female-identifying faculty members has not caught up with the student population in the School of BioSci, there are measures in place to keep the faculty hiring process equitable for all.

Barry expresses that women have historically had more obstacles than men in gaining a career in the biological sciences. Although conditions for women have improved in the past years, the discrepancies are still seen today. As someone who has gone through years of rigorous biology schooling, Barry notes that the “leaky pipeline” effect increasingly diminishes the number of women in higher levels of scientific academia and careers.

Jessie Altieri is a third year biomedical sciences Ph.D. student at the UC Irvine School of Medicine. Her research under the Department of Microbiology and Molecular Genetics involves regulating pre-mRNA splicing. 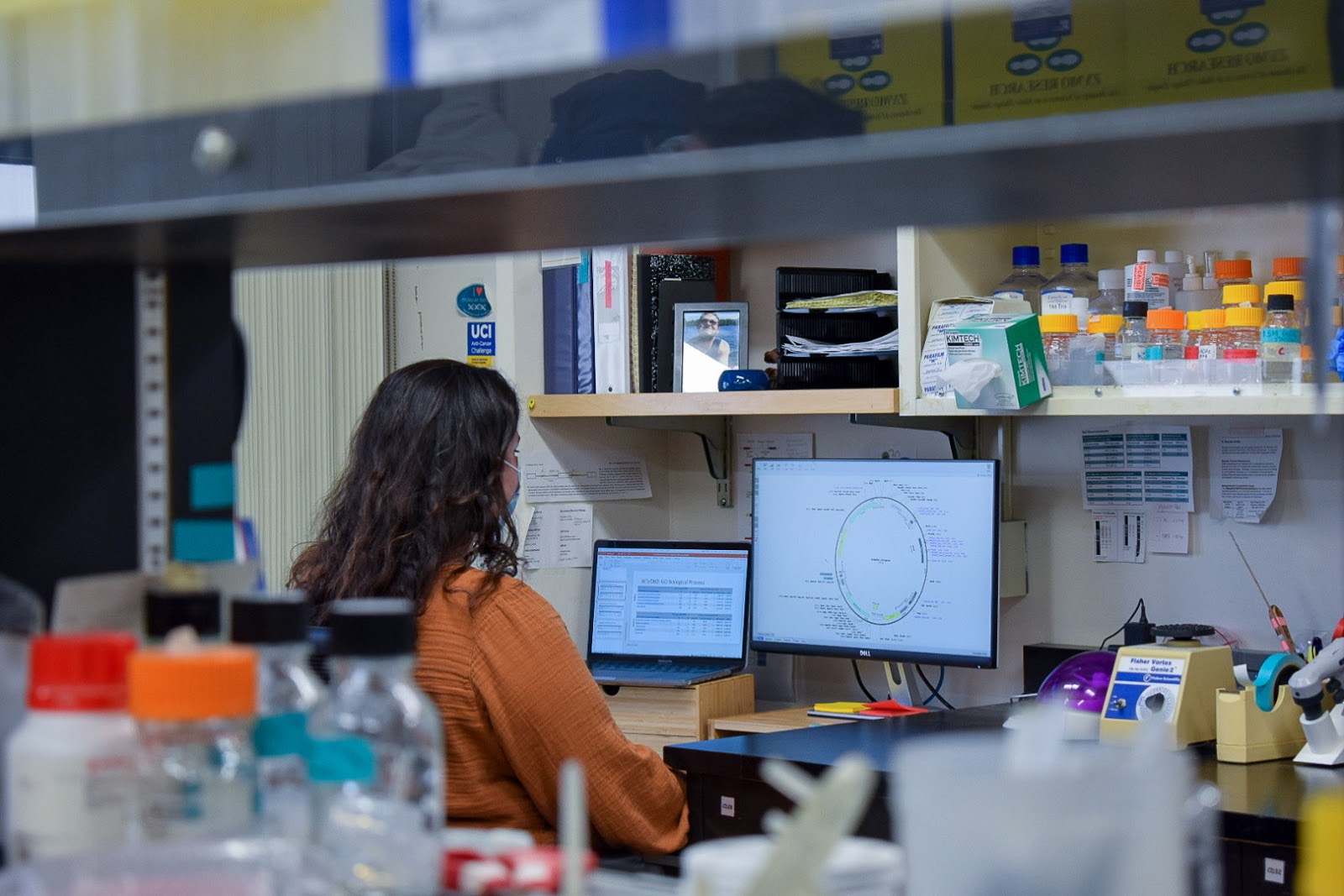 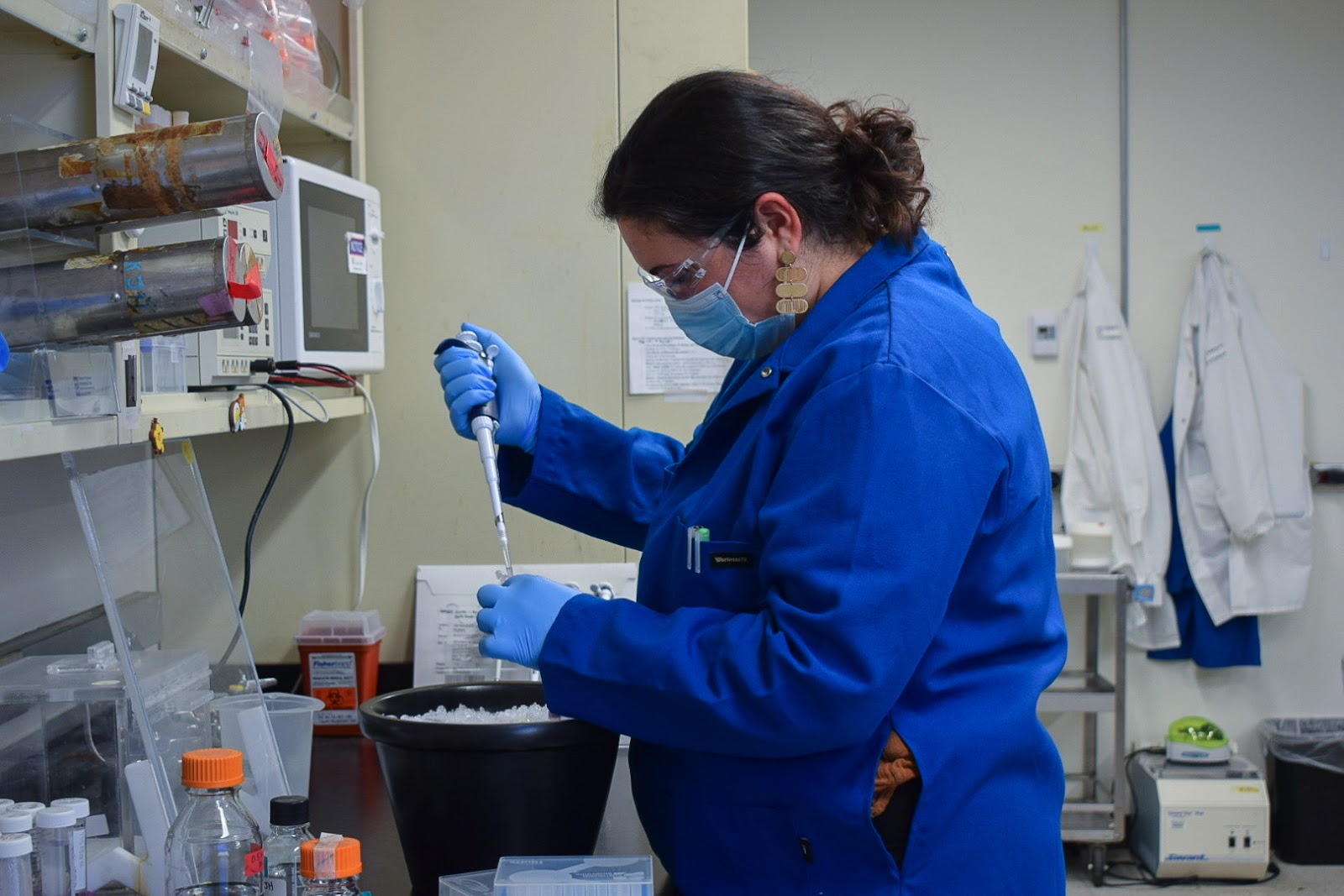 Altieri at work in her research lab. She was the first author in a recently published research paper on pre-mRNA splicing outcomes, which she considers her greatest accomplishment in the biological sciences thus far. Through this, she received public recognition in the scientific community for the first time in her research career.

Altieri discusses a research paper with a labmate. The department which Altieri currently researches in is predominantly led by male Principal Investigators, highlighting concerns about the lack of representation of women leaders in the scientific workforce compared to the scientific, academic community.

Many women in STEM face obstacles that hinder their goal for a STEM career. A plaque on Altieri’s desk reminds her of her efforts to achieve her goals as a woman in STEM.

Dianne Lee is a Photo Intern for the Winter 2022 quarter. She can be reached at diannedl@uci.edu.

The UCI Translational Neuroscience Laboratory, or Yassa Lab, run by Dr. Michael Yassa, director of the Center for the Neurobiology of Learning and Memory,...

The Tonga Volcano and Its Aftermath

The Hunga Tonga–Hunga Ha’apai volcano erupted on Jan. 15, 2022, off the coast of Tonga, creating one of the largest eruptions the world has...